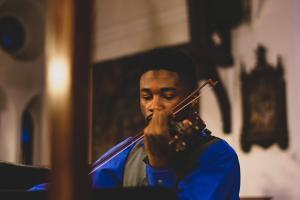 Nothing could be more frustrating than being told by teachers and peers that you “need to improve intonation,” without really being taught how to do this. Hearing proper intonation is something that is developed over many years of practice, but only if you actually integrate intonation awareness into your daily practice.

Here are some basic Tips for Improving Intonation.

It is just as important to literally sing the music you are learning as it is to play it. Singing the music helps you internalize the music and the distance between pitches. When you sing the pitches, it is much easier to transfer this aural awareness to the instrument. After singing a passage, you’ll immediately find that playing the same passage on the instrument will reveal weak spots of intonation and strengthen others.

When singing, you can use neutral syllables like “la-la-la,” or you can use musical solfege, “do, re, mi,” etc., or, you can use note names, “A, B, C,” etc. Many teachers will recommend solfege as the best option because you will further internalize the pitches. Whatever you choose, as long as you’re singing – this is what matters most.

Play with a Drone Note

It can be difficult to gauge whether or not something is in tune unless you have something to compare it against. A great way to accomplish this is to play with a drone note, or a note that continuously plays for a long time. For instance, if you are playing a piece of music in the key of D major (two sharps in the key signature), try playing while listening to a D on drone. The D is the tonic, or first note of the D major scale. This will give you a basis for which to compare your intonation.

It’s tempting for beginners to use handy stickers and marking tape to keep track of where notes live on the violin fingerboard. While this may be immediately helpful, it ultimately prevents the player from learning how to hear the notes and the distance between them. Playing in tune is not a visual process – you must develop your ear. Instead of looking at the stickers, use your ear to judge if something sounds right.

When you are learning a new piece, try to initially learn as much as you can by ear. The reason for this is that you will internalize the music and intonation in a more organic way than you will if you read the music first.

Another way to practice playing by ear is to learn pop songs by ear, just for fun. Put on a playlist and just try to figure things out with your instrument. You’ll immediately hear when something is “off,” or “not right,” and will instinctively search for a way to fix it. This will flex and improve your intonation sensors.

When focusing on the intonation of a particular passage, it is crucial to slow down and avoid vibrato (if you have developed this skill). Slowing down is key to listening accurately and internalizing the proper hand position and feel for accurate intonation. It is important to avoid vibrato because it distorts the pitch in such a way that makes it difficult to gauge intonation.

1 thought on “Tips for Improving Intonation”