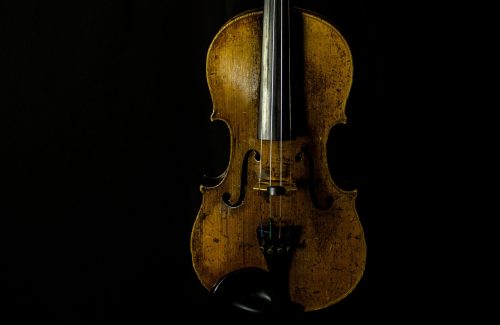 Many of us have heard stories of violins worth millions of dollars – and maybe we have even heard the name “Strad” thrown around casually – but what is a “Strad?” Why are they so expensive? What are the most expensive violins in the world? And what makes a violin “expensive?” Let’s explore the Top 5 Most Expensive Violins in the World.

What makes a violin expensive?

There are many contributing factors to why violins are so expensive – much of which revolves around time and craftsmanship.

Violins are made of spruce and maple and, usually, the older the wood is, the better the sound will be. This means that some violins are made with wood that has been aged for over 20 years before their creation! There are some luthiers (violin makers), who have a special collection of wood they are saving for years until they feel the wood is aged enough to begin building a violin. This alone can drive the price up!

Also, the best violins are always handcrafted by a single luthier with superior quality. When you pay for a violin, you are not just paying for the instrument. You are paying for the time the luthier took to study the art of violin making and to craft a unique, individual violin of excellent quality. This attention to detail and quality has a significant impact on the price.

Another interesting aspect of string instruments is that the value of a finely crafted instrument typically appreciates, or grows, over time. This is very different from say, the value of a car, which depreciates the moment you purchase it. The reason for this is that violins tend to be like fine wine – the older it is, the better it tastes and the rarer it is to find. After a certain amount of time passes, a fine violin almost becomes an antique.

What often sets apart “any old” violin from the best old violins is not just the craftsmanship, it can also be a matter of who made the violin. If the violin maker was well-revered – practically a legend – this will drive the price up.

Lastly, sometimes a violin is expensive purely because it just sounds good. At the end of the day, violinists choose the violin they want because they like the sound. And having a good sound is often the result of fine craftsmanship and quality.

One disclaimer to make is that not all old violins are expensive, nor are they always of the best quality. Conversely, not all new violins are cheap and inferior in quality!

In fact, there are many, many modern luthiers crafting high-quality violins for high prices! This is usually because the craftsmanship and sound are so high that there are waiting lists for these violins to be made. Many people also like to know that, if they need to have the violin checked or repaired, they can see the original luthier to attend to the violin personally.

Antonio Stradivari is revered to be one of the finest violin makers of our time, hailing from late 17th-early 18th century Cremona, Italy. His violins have a reputation of being worth millions of dollars and are often considered priceless – even being sequestered to museums for protection rather than being played.

Giuseppe Guarneri is another famous luthier of late 17th-early 18th century Cremona, Italy. Giuseppe Guarneri was one of a family of respected luthiers active during that time. The Guarneri violins are often considered to be as priceless as many Stradivarius violins.

The Vieuxtemps Guarneri was named the “Vieuxtemps” because it was owned for some time by Henri Vieuxtemps, a famous violinist and composer of the 19th century. In 2012, the Vieuxtemps was purchased by an anonymous donor for $16,000,000 and lovingly loaned to violinist Anne Akiko Meyers for the rest of her lifetime.

Coming in close to the Vieuxtemps is Stradviari’s Lady Blunt. The Lady Blunt got its name from one of its first owners, Lord Byron’s granddaughter, Lady Anne Blunt. Just like the Messiah, the Lady Blunt has been preserved in almost perfect condition due to minimal playing. The most notable violinist to have played the Lady Blunt is Yehudi Menuhin.

Coming in at fourth is another violin from the Guarneri family, this time from Bartolomeo Giuseppe Guarneri, or Del Gesù, as he is often nicknamed. Del Gesù is estimated to have made nearly 250 violins in his short time as a luthier before dying a tragically young death.

The Carrodus Guarneri is just one of the known, precious violins that Del Gesù crafted. The Carrodus was made in 1743, just one year before his death. The violin passed through a few hands before ultimately finding ownership with the English violinist, John Carrodus, after whom the violin eventually became nicknamed. Another famous violinist to have played this instrument was Niccolo Paganini himself.

The Carrodus Guarneri is valued to be worth at least $10 million and is currently on loan to Richard Tognetti of the Australian Chamber Orchestra.

Its most notable owner to date was violinist Aaron Rosand, who parted with the instrument in 2009 after having played it for more than 50 years. He is quoted as saying, “I felt as if I left part of my body behind.”

Violins can be quite expensive for a variety of reasons that often come down to time and craftsmanship. Oftentimes, the older the violin is, the better it will be because the sound often gets better over time. The highest quality, “priceless” antique violins are often attributed to a select handful of luthiers, with Stradivari and the Guarneri family being credited for having made the Top 5 Most Expensive Violins in the World.

Given the fact that the value of instruments is always changing, this list could become quickly outdated. But as of now, these five violins are considered to be the most expensive in the world. Would you be tempted to open your wallet for one of these priceless gems?

Scroll back to top