How Many Strings Does A Violin Have: Detailed Guide

Violins are stringed instruments used to make beautiful sounds in musical symphonies and songs. Violin has a similar shape to that of the best electric guitar, but it is a bit smaller, and it is played using a bow rather than fingers. To understand how to play these string instruments, you will need to understand the anatomy of an instrument. So if you are wondering how many strings does a violin have or how it works, we got you covered. Read on to learn more!

How Many Strings Does A Violin Have?

The number of strings used on a violin might vary depending on its size. However, most violin family members, including the viola, violin, and cello, have four strings tuned in fifths. The four strings include G, D, A and E, from the lowest note to the highest note. This string instrument is stunned to a perfect fifth, meaning the tone from each open string produces a five-note, usually higher than the string below it.

As with other members of the string instrument family, some more complex violins have additional strings. Professional musicals already familiar with the traditional violin play these kinds of violins. Most people who opt for violins with more than four strings often look for additional or a different sound than that produced by the four-string instrument.

The E string is tuned in E5 with a pitch range of two octaves above E5 and as high as E7. This string is usually 0.25mm thick, producing the highest pitch notes. If you are right-handed, the string E is usually on the right side of the violin when you are facing it.

The A is usually one of the strings on your violin tuned at A4. It is one of the two strings usually located at the E string. The A string is the second thinnest, with a measurement of 0.50 mm.

The D String is usually tuned at D4. The string is one of the two strings between A String and G String. It usually has a thickness of 0.75mm.

G String is the violin's lowest string that is usually tuned at G3. The string is usually located below the C String. It has a thickness of around 0.83mm and vibrates slower than the thin strings, meaning it will have a low-frequency sound. If you are right-handed, it is usually on the left side of the violin when facing it.

The C String is not typically found on a standard violin but it is usually tuned C3. This string is usually found on a 5 string instrument and acts as fifth string. Basically, it has a lower pitch than the normal ranges of violin strings. The String c is that it provides more versatility making it ideal if you are looking to get improved sounds. It is mostly used for swing, jazz, rock, and classical music.

Number Of Strings Other Violins Have

Violins typically have four strings, but you will find others with less than four or more than five. Professional violinists mostly play these violins with more or fewer strings. For instance, the pochette is a type of violin with three strings mostly used by street musicians and dance masters. This three-stringed instrument is usually smaller than others with five strings and above.

On the other hand, you will find other violins with more than five strings. For example, the electric violins comprise between five to seven strings. The fifth string is tuned at a low C, the sixth string is a low F, and the seventh one is a Bb. Another type of violin contains eight strings founded by the Norwegian Hardanger Fiddle or hardingfele in Norway. The four main strings of this instrument are played in the same manner as the classical violin, while the sympathetic strings resonate when the main ones are bowed.

How is a violin string tuned? 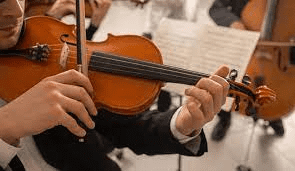 The violin strings are usually attached to four tuning pegs in the pegbox located at the top of the violin. The E string is the only string that features an adjuster meaning it can be easily tuned. The rest of the strings rely on the tuning pegs, except for some electrical violins that have adjusters for each string.

Again, you will find some student violins that may contain a tailpiece with four inbuild runners. To tune a violin, you need to start by tunning the A String to achieve tune A, commonly referred to as the A440.

Typically, when playing the violin, the vibration from the strings is directly transmitted to the top and bottom plate through the bridge. This then transfers to the hollow body delivering a brilliantly rich tone. The bowed strings vibrate in circular motions that produce the essential sound.

What Are Violin Strings Made From?

Violin strings are made using different materials depending on the brand and the make. Traditionally, the strings were made from catgut or sheep gut. Even though strings are still made from gut material, most of them tend to be made from steel and nylon materials.

Most advanced violinists prefer to use the catgut strings since they will deliver a darker and richer tone than those made from nylon and steel. However, the greatest downside of the catgut string is that they tend to degrade faster and are most often more expensive than other types.

Synthetic and metal strings are considered more reliable and are the most preferred choice for most violinists. Remember, you need to choose high-quality violin strings since they will affect the tone delivered. Additionally, you will need to know how to care for and clean your violin in order to keep it at its best.

While there are different types of violins with different numbers of strings, the traditional violin that is commonly used usually has four strings tuned in fifths. The strings are E, A, D, and G from the lowest to the highest. With that understanding, it is now much easier to learn how to play the violin and understand the anatomy of your violin.