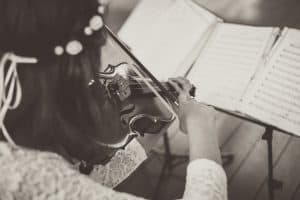 Many people who are familiar with the guitar often compare it with the violin and wonder, “Are there tabs for violin? What chords can the violin play? How many positions are there on a violin?” While the guitar is often a very familiar and relatable instrument to many people, the violin is actually quite different from the guitar. Besides not having frets (frets are the lines you see on the neck of the guitar where musicians place their left hand), violin approaches chords and positions quite differently. Let’s take some time to explore “How many positions are there on a violin?”

When playing the violin, we use our left-hand fingers to press gently on the strings against the fingerboard to create new notes. So when you play an “open” string, or a string by itself with no fingers pressing down, you will hear one note (G, D, A, or E). Once you place one finger down on the string, the string length shortens and thus the pitch goes higher, creating a new note.

So – you place one finger down, you get a new note. You place another finger down – another new note. With our left hand, we can only place four fingers down before we’ve “run out” of fingers because our left thumb is just hanging out, helping us hold the violin in our left hand.

When you change the placement of your hand on the fingerboard, you essentially move your hand to a new position.

How many positions are there on a violin?

If you move your hand placement up one step, or bring it closer to your nose so that the first finger now rests where the second finger used to be, you’ve achieved second position. From here, you can place your second, third, and fourth fingers once again. You will find that you can play one note higher than you had been able to play in the previous position.

This pattern continues up the violin fingerboard. Some would argue that there are at least 14 positions available to play on the violin! While this is theoretically possible, it is quite rare for violinists to perform at such a high position, especially for more than a brief moment in a piece of music.

Traditionally, most violinists will begin studying at first position and usually advance in their studies to about third position. Intermediate students tend to move on to fourth and fifth positions, with advanced students progressing to sixth, seventh, and eighth positions.

Positions higher than eighth position tend to be reserved for select moments in music that are most often encountered by professional violinists.

What does H3 mean on violin?

As mentioned before, the left hand on the violin uses the index, middle, ring, and pinky fingers. For violin, we call them the first (index), second (middle), third (ring), and fourth (pinky) fingers. Sometimes you can play the same note with a different finger, so you will often see the number of the finger (fingerings) marked in sheet music. First finger would be marked with a 1; second finger with a 2; and so on. This helps the violinist understand which position is recommended.

As an example, when playing in first position on the A string, the third finger will be placed at the note “D.” In the music, you may even see a 3 written above the D, indicating that you should play with the third finger.

However, sometimes in music, we have a lower version of D, which is called D-flat, or D♭. One way to play D♭is lowering the third finger on the A string. Sometimes you will see L3, or “low-3” written over the D♭as a kind of reminder.

The higher version of D is called D-sharp, or D#, which is played by raising the third finger on the A string higher. So, sometimes you will see H3, or “high-3” written over the D# as a kind of reminder.

Tabs & Chords on the Violin

It’s easy for many people to relate what they know about the guitar to the violin. While it may seem like they are similar, they couldn’t be more opposite in design and playing technique. One major difference between guitar and violin is the nature of tabs and chords.

How do you read violin tabs?

Some teachers will come up with their own systems to visually show the notes on the violin fingerboard. However, this is not common and is not something to count on. Most violinists learn to play either by rote learning, or playing-by-ear, or by learning to read sheet music.

Can a violin play chords?

For chords, it’s kind of the same thing as tabs. Chords do exist in some capacity on the violin, but it’s not like what you think of with guitar chords. There are a few reasons for this, but namely, it’s because the violin is designed to be primarily a melodic instrument, meaning it is most likely to play the part of the song that you recognize and can sing along with, rather than the harmonic textures beneath it. Even the bridge holding up the strings is angled in such a way that encourages single note melodies rather than chords.

Chords are possible on the violin, but they are often used for emphasis, to fill out the sound for a certain passage, or as a finishing gesture at the end of the piece. It’s very rare to see an entire piece of music for violin that is only chords.

Also, most chords are played like two-note double-stops, or when you play two strings at once. Chords of three notes or more can be played but they are usually rolled, or broken up into parts, rather than played at once like on a piano.

Also, you will often see chords used with pizzicato, or when the violinist “plucks” or pulls on the string with the right hand rather than playing with the bow.

How many notes can a violin play at once?

Many people are curious as to just how many notes a violin can play at once. This answer can vary considerably when you consider the limitless possibilities of available technology. However, for the purpose of simplicity, we’ll answer this question for acoustic violin only.

It is most common to hear a violin play two or three notes at once. On occasion, you may hear an explosive, sometimes aggressive, chord played for effect using all four strings at once. This is rare and usually only done for effect or flourish.

The possibilities are endless

While it may be tempting to compare the violin to the guitar, they are super different and stand alone in their own techniques and notation. Violin focuses more on melody-based writing and positions rather than tabs and chords. Even though there are a finite amount of notes that can be played at once, or a finite amount of positions available, there are so many sounds, colors, and textures that can be achieved with a single, acoustic violin.